A Civilization - African and Arab 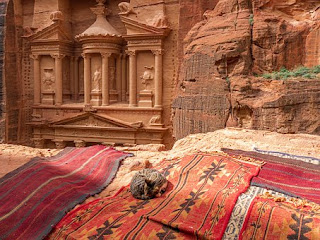 From early beginnings in the pre-Aksumite period (during the early part of the first millennium BC) the town of Aksum (or Axum) became the central focus of a trading civilization that grew to combine elements of Semitic (South Arabian) culture with an indigenous African economy, which may originally have had similarities with the more recent southern African iron-age settlements at Mapungubwe and Zimbabwe. There were also more exotic (and presumably less important) influences on this civilization from the Persian Achaemenid, Greek, Egyptian and Nubian (Kushite) civilizations. In time, the full-blown Aksumite civilization had trading links as far off as Rome, Byzantine Constantinople and even India.

Aksum itself is an existing town situated at an altitude above 2000 metres, at the northern end of the extensive Ethiopian plateau. It is close to the source of the Atbara Nile and is some 150 kms south of the current regional centre of Asmara and is 200 km west of the Red Sea coast. Due to the high altitude it is relatively well watered, with a warm healthy climate, able to sustain cereal farming as well as cattle herding. It stands astride an ancient trade route, connecting the central Ethiopian plateau with the harsh, dry, low-lying Eritrean plain. This route reached the Red Sea coast at the port of Adulis, in ancient times an important link with the coastal towns of Southern Arabia just across the narrow gulf and the maritime trade route northwards up the Red Sea to Egypt and the Mediterranean. Another important caravan route led off the plateau heading westward down the Atbara valley and Wadi Hawad road, reaching the Nile valley at the kingdom of Meroe in the Sudanese (Nubian) hinterland. Local routes also led northwards to organised settlements in the Gash delta area and southwards to remote centres spread out across the extensive Ethiopian plateau.

That it became a great international trading centre is well established. Besides the ubiquitous South Arabian relics, numerous ancient imported trade-goods, pottery, manufactured artefacts and coins from far-flung areas, such as Greece, Egypt, Byzantium and India have been found in the Aksum region. In addition to the many inscriptions in South Arabian Sabean script there are others in the local language using Greek characters. Extant manuscripts from the Mediterranean civilizations, written in historical times have left us references to Aksum and Adulis. These include works by the Roman author Pliny the Elder; the well-known Roman/Byzantine historian Priscus; Agatharchides of Cnidus who wrote: On the Erythrean Sea, and the unknown author of Periplus Maris Erythraei and even a fiction story of Heliodorus, the Ethiopian Story. (Connah, 1987). There were also later Islamic historians who recorded earlier oral traditions. These diverse sources give some evidence of the type of goods exported from the region (ivory, gold, skins, aromatic oils, slaves etc) they also tell of Aksum's trading links and something of the history of its rulers. However the historic, epigraphic, linguistic and (very limited) archaeological evidence for the Pre-Aksumite phase is to some extent conflicting and thus difficult to reconcile into a clear and coherent picture of how this trading state and its unique culture actually may have evolved.

Conventional wisdom has long held that the prosperity and strategic importance of Aksum derived entirely from its connection with South Arabia, to the extent that the civilization was a mere "transplant from South Arabia", (Phillipson: 1990: 55-59) The accepted position was that Aksum's entire raison d'etre was to be a kind of trading emporium for the Arabians, such as Shanghai was in the late 19th century for the Europeans. A further proposal, considered by some, is outright colonization by an Eritrean group with South Arabian cultural ties, moving up from the coastal plain. However Phillipson makes a very convincing case for an indigenous African basis for the initial growth in importance of the pre-Aksumite region. Firstly he points out that if the trade with Arabia was all-important, a site actually on the coast, or at least closer to the eastern edge of the plateau, with consequently shorter routing, would have been far more appropriate than Aksum itself. Phillipson maintains that it was actually the intra-regional trade between rich localities of the central and western Ethiopian plateau and the Sudanese lowlands, coupled with an viable well-established local agricultural basis for settlement, that pre-determined Aksum's suitability to be the main regional growth point.

An agricultural surplus is always a pre-requisite for supporting the formation of the elitist power group, necessary for transforming a loosely connected indigenous society into an organised state of any kind. Once there is a structured environment to provide security, any remaining agricultural surplus can be used to barter with the area's immediate neighbours in order to make up specific deficiencies or shortfalls of the local crop production or to improve the herds. In time the network would be expanded in search of more exotic goods and luxuries, possibly originating from more technically advanced areas. In the mature phase of its existence, if the location is suitable, the state or its private citizens would utilize their facilities and marketing skills to act as middlemen, trading non-indigenous products in both directions, with the intention of making a substantial profit on the exchange. If all goes well the model becomes self-sustaining. Applying this logic to the case of Aksum the Arabian and international trade via the Red Sea could have only grow in importance after Aksum had already established it's pre-eminence as an important local centre for agriculture and intra-regional indigenous trade. The initial phases of this process probably took place over several centuries. However at some point the existence of flourishing local markets attracted the attention of foreign merchants and once started the Arabian and international trade added further impetus to the general prosperity and promoted strong state formation and the cultural growth of the Aksum area. Unfortunately little archaeological evidence has yet been accumulated for establishing what the true basis of this original wealth actually was. Recent political instability between Ethiopia and Eritrea has been delaying the necessary archaeological research for some time.

However there is considerable architectural, ceramic and epigraphic evidence showing very close ties between the urban ruling elite and the kingdom of Saba (Biblical Sheba) and certain other South Arabian cities during the middle of the first millennium BC. During this period, known as the Middle Pre-Aksumite era, impressive monumental structures such as the Aksum obelisk (stolen by Mussolini) and also Sabean style temples and inscriptions at Aksum, Yeha, Kaskase, Marib, Kohairo, Matara and Adulis are clear evidence of a complex prosperous society, The strategic and cultural connections between the elite leadership group and the South Arabians, whether the result of conquest, trading ties, political alliances or strategic marriages, resulted in the area being consolidated into a kingdom run on the Sabean model (the D'mt=Daamat kingdom), which endured through the middle centuries of the first millennium BC. The region copied the use of the plough, written script, architecture and irrigation techniques from the Arabians. Many of the gods known at Aksum at this time were of Arabian origin and their cult was worshipped in a similar manner as at Saba. Pre-Aksumite Kings took the titles mkrb as in the Sabean mukarib (Fattovich:1990 pp 1-14) although sometimes also used the more common ancient Semitic title for king mlk or malik (as inUgaritic or Hebrew).

However it seems that the local indigenous culture re-asserted itself by the late pre-Aksumite phase and the kingdom split up and much of the Arabian cultural influence disappeared from the Aksum region (Fattovich, 1990). Yet language is not so easily lost and linguistic evidence shows that the Semitic languages still used throughout this region have their roots in the Arabian Peninsula. Opinion is divided as to whether the Sabean language was commonly spoken by all the inhabitants of the mid Pre-Aksumite state, or just by a ruling elite. It is also not known whether the adoption of the language was due to an early pre-historic migration of peoples from across the Red Sea or due to acculturation as a result of Arabian conquest of the pre-Aksumite state or some other close association. In time the language became less like South Arabian and evolved through an intermediate language called Ge'ez into the modern languages of Amharic, Tigre and Tigrinya (Connah, 1987).

Whatever the reason for its initial growth and the cultural components making up its society, Aksum was able to prosper as a strong trading entity for more than a thousand years. This was because it had a good agricultural basis for feeding its citizens and its trade caravans could source African commodities, much needed by the wealthy civilizations of the Mediterranean basin. In exchange it brought back manufactures such as fabrics and metal weapons that were in demand by the African tribes of the interior. So successful was it in these enterprises that Aksum probably caused the downfall of Meroe in the early 4th century AD, by diverting most African trade from the long established Nile route to its own Red Sea fleet. It was also admirably positioned through its port at Adulis to re-distribute valuable spices such as frankincense and myrrh from Arabia Felix as well as many other products from the east coast and horn of African and the islands as far as India. These products included aromatic oils, gum, dyestuffs and kohl etc. However by the 9th Century A.D pressure from the growth of Islam persuaded the (by then Christian) Ethiopians to take an isolationist path, retreating to their high plateau and cutting themselves right away from the world's view. This resolve was coupled with an increasing societal tendency towards a non-urbanized form of feudalism. Effectively the state of Aksum had lost its reason to exist and was finally destroyed by a tribal chieftainess from the interior.

Ethiopia became a forgotten land, both isolated and isolationist - steadfastly Christian, in a region now dominated by Islam. Vague stories of a legendery warrior ruler, Prester John, continued to reach the West, but nothing at all was known of the isolated Christian kingdom he was supposed to rule. However this same withdrawal from world affairs ensured the kingdom's unique endurance as an unconquered indigenous cultural entity right up until the present day. It was this fiercely independent spirit that, with the help of a few British and South African troops, was able to ultimately defeat a belated attempt at colonization by Mussolini's Italian fascists.

Article Source: http://EzineArticles.com/3305669
at 4:05:00 AM No comments:
Email ThisBlogThis!Share to TwitterShare to FacebookShare to Pinterest
Older Posts Home
Subscribe to: Posts (Atom)