Edo State, The Empire of Oba of Bini Kingdom 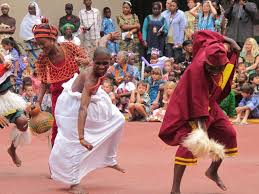 Edo State, one of the older cities in Nigeria (and especially the Bini Kingdom) is renowned, both nationally and internationally as the bastion and citadel of cultural and traditional heritage. The state is one of Africa's richest stores of artworks. This is explained when the artifacts from the region are displayed.
Benin City, city in southern Nigeria, capital of Edo State, on the Benin River. The city is connected by road to Lagos, Onitsha, and the western Niger Delta. Benin City is the center of a prosperous region in which rubber, palm oil, yams, cassava, corn, and timber are produced. Its industries include rubber processing, saw milling, and brewing. Benin City is the site of a museum renowned for its large collection of antique carvings and other local decorative arts. The University of Benin (1970) is also located here.
Historically an important center for trade in ivory and pepper, Benin City was the center of the powerful Kingdom of Benin from before the 15th century to the late 19th century. Benin's artisans were noted for wood and ivory carving and bronze casting. European visitors in the 15th century were amazed by Benin City's architecture and physical layout, and compared it favorably to Europe's finest cities. Much of Benin City's artistic heritage was lost in 1897 when the British captured the city and seized many of its artworks.
Kingdom of Benin, state of West Africa that flourished from the 15th to the 17th century. Its capital was Benin City, in present-day Nigeria. Founded by the Edo or Bini people in the 12th century, it was ruled by a line of kings (obas) who were originally war leaders, but later assumed a more religious character. The extent of the kingdom is uncertain, but it probably controlled most of southern Nigeria in its heyday.
One of the most influential obas of Benin was Ewuare, who ruled the kingdom from approximately 1440 to 1470. Ewuare dramatically increased the territory controlled by the kingdom, strengthened the central government, and established a system of primogeniture under which the title of oba would pass from father to son. He is also thought to have commissioned a series of fortifications surrounding the capital city.
During the reign of Ewuare's son Ozolua, who served as oba from about 1480 to 1504, Benin developed mutually beneficial commercial and diplomatic relations with Portugal. Some evidence suggests that Ozolua's son and successor, Esigie, may have spoken and read Portuguese. From the 16th through the 18th century the kingdom traded with European merchants in palm oil, ivory, pepper, and textiles. Benin also took part in the slave trade, although after the early 16th century the king allowed only female slaves to be exported. In the 18th century, French, Portuguese, and Dutch traders opened ports and trading posts along the Beninese coast, exchanging weapons for slaves.
As patrons of the arts, the obas sponsored the creation of some of Benin's most famous art work. Brass bas reliefs, which originally hung on the palace walls, depict scenes of life at the court of the obas. Traditional bronze ceremonial jewelry from the kingdom, which was hand cast and highly detailed, is considered to be one of the finest achievements of African art.
The power of the Kingdom of Benin declined in the 18th and 19th centuries. The country was annexed to British Nigeria in 1897, became a colony of French West Africa in 1904, and finally regained independence as the Republic of Benin in 1960. Despite these changes, the obas still perform administrative and ceremonial functions into the 21st.
Edo State has many tourist sites of cultural, historical and artistic values in many local government areas of the State. Senator (Prof.) Osunbor realizes the importance of tourism and tourist sites and contends that only a properly focused and result-driven State Tourism Board will push the primary of the abundant tourism potentialities to public consciousness.
Take a tour to visit the ancient kingdom. The empire of oba bini, where you will enjoy your tour.


Article Source: http://EzineArticles.com/5034035
at 1:56:00 PM
Email ThisBlogThis!Share to TwitterShare to FacebookShare to Pinterest