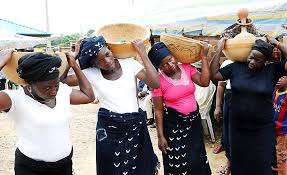 Dance refers to a styled and patterned bodily movement(s) which is usually performed to music. Dance should serve the purpose of communication or lively expression. Dance as a medium of art has been evergreen like the cedar. In various parts of the globe, dance means different things to folks. In recent decades, the inextinguishable dance-styles have swept across the continents like wildfire.
The African continent has enjoyed its own fair share of the dance-craze. Since it has become imperative for dance to go alongside with music, dance fairs have been organized in every nook and cranny around Africa.
In western Africa, Nigeria has proven to be the center of the dance revolution. Every crevice in Nigeria has in recent times come up with a new dance style. The intrusion of a defiant dance culture into Nigeria is not a product of coincidence. Nigeria as a geographical entity is surrounded by French-speaking West African neighbours on its borders. These French-speaking nations have previously enjoyed a very stable dance culture. In the late 1990s, a dance called mapouka was banned by governments of several west- African countries for its excessive sexual contents. It is pertinent to note that the mapouka dance originated from Cote d' Ivoire, another French-speaking West African country.
In the late 1990s cum early 2000s, the whirlwind visit of the makossa dance swept through the African continent like a volcano. The makossa dance step conquered virtually every African nation Nigeria inclusive. The makossa dance which originated from a certain French-speaking West African country was Nigeria's most imported commodity at that time (late 1990s cum early 2000s). The makossa dance engulfed every Nigerian child, youth and adult in various ways. It became so trendy that it eliminated the galala dance step which was the masses' choice whenever a party was thrown at them.
Prior to the advent of the makossa dance, the galala dance was the official dance in every Nigerian ghetto community. This dance style was highly promoted by prominent Nigerian acts who happen to be an offspring of the ghetto community. Some notable acts that stood tall to promote the galala cause include Daddy Showkey, Baba Fryo & African China.
When the makossa dance gained an awesome recognition and loud ovation in the country, the suo dance began to take its toll. The suo dance gradually substituted the makossa dance which paved way for its entrance into the Nigerian entertainment scenario. I thought that the suo dance will enjoy a lengthy reign as Nigeria's official ghetto dance style. The suo dance which was flaunted and promoted by artists like Danfo Drivers (mad melon and mountain black), Marvelous Benjy et al. entailed the lowering of the waist and the swinging movements of the hands like someone about to start a generator set.
Before I could say 'Jack', my thoughts were proven to be a mere oversight. The yahoozee era had dawned on every Nigerian city. The yahoozee dance style had some negative intonations; it was alleged to be a dance style founded by internet scammers and fraudsters popularly known in Nigerian suburbs as yahoo boys. The reign of the dance poured on every Nigerian like a torrential downpour of rainfall. From the kindergarten schools to the universities, the Nigerian people did the yahoozee dance with a sense of vigour. Nigerian singer, Olu Maintain adopted this dance style as a trade mark and re-packaged yahoozee into a brand. The dance which looks very imbecilic contains a lot of hand movements while the feet remain rather stationary.
Once again I thought the Nigerian populace would be out of ideas, but I was proven to be so wrong. The Atalanta breeze has slowly but surely crept into every Nigerian social function. Churches, amusement spots, work places, and dance shows have all contracted the Atalanta fever. From the rural to the urban areas, everyone has towed the Atalanta line. The movement of the hands and legs produces a crazy spectacle. In the last African cup of nations (AFCON 2010) hosted by Angola, Nigerian football maestros like Peter Osaze Odemwingie and Obafemi Akinwunmi Martins at various times did the Atalanta dance as a celebration of their goals. Nigerian musicians like Artquake, Terry G, Timaya, TuFace Idibia and Ruggedman have also been proud exports of the Alanta culture.
As I write, many dance steps are cropping up in various parts of Nigeria. I would suggest to the Ministry of Culture and tourism to look into the dancing market and try to strategize ways to exploit this market. If the dancing industry is properly exploited, then Nigeria might begin to enjoy the influx of tourists into the country.
The Nigeria dance culture has indeed proven to be an intricate part of the Nigerian entertainment industry. It has come to stay and probably grow.


Article Source: http://EzineArticles.com/4441818
at 1:50:00 PM
Email ThisBlogThis!Share to TwitterShare to FacebookShare to Pinterest